"I was born and raised in Carle Place NY. Anyone familiar with guitar mythology knows that little hamlet on Long Island produced two of the most influential guitarists of the past 35 years and I am privileged to have them both in my life. Steve and I have been friends since we were children and we both had Joe as our first guitar teacher as we entered high school. What can I say? Without the foundation laid down by Joe and going through the musical growing phases with Steve, I would have a completely different approach to the guitar and music today. Taking Bill Westcott's music theory class in tenth grade with Steve and having Joe relate what we were learning to the guitar opened my eyes and ears to endless possibilities. I cherish those memories and of course, even more the friendships I have with both of them today."

LEARNing a skill that lasts a lifetime 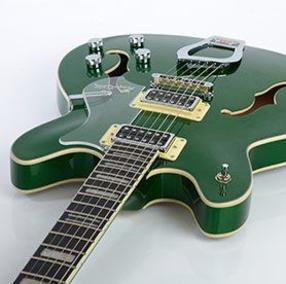 Coming of age on Long Island in the 70s, Rich knew early on he wanted to be a musician. Influenced by the musical tastes of everyone in his family, he started guitar lessons at the age of 14.  "I immediately became fascinated with the possibilities of guitar, learning music and the camaraderie that came with friends who were fellow musicians." After high school Rich attended the Berklee College of Music in Boston MA. After Berklee he moved back to LI and became a sought-after guitarist for local bands. Not content to be just a hired gun, Rich continued his music education with private lessons from jazz guitarist George B. It was at this time Rich began his teaching practice. He moved to Virginia to become the teacher-in-residence at a performing arts school in the Shenandoah Valley. Eventually he moved to California, taught a guitar class at the UCLA Lab School and launched a guitar program at a non-profit education facility for at-risk young people in Hollywood, all while building up his private practice.

"Because most of my classes are individual lessons, several factors go into the curriculum: the student's age, their daily exposure to music and previous experience to name a few.

"If I'm teaching a child between the ages of 6-12 I'll seek out the parents' viewpoint. Most parents want the lessons to be fun with no undue pressure on their child. Chances are he or she is in other activities besides music so practice time will be minimal. If I'm teaching a teenager or young adult, more than likely he or she has made the guitar (and music) a priority and is seriously trying to improve in all areas: technique, theory, ear training, etc. If it's an adult student, well, it's a lot of fun helping them to get to where they realistically want to be.